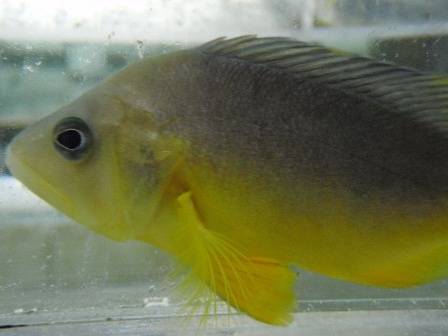 The Yellowbelly Hamlet, Hypoplectrus aberrans, will range in color from a more yellowish body to a pattern that has more brown above the mid-body line, making a unique choice to add to your tank. Hamlets can be found in a variety of colors. The morphology and coloring of the fish varies across its range. The Hamlet is a native of coral reefs in Western Central Atlantic Ocean: Two color morphs – one from the Greater Antilles/Panama and a second morph from the Virgin Islands.
The Yellowbelly Hamlet can become shy, so they should be kept in a tank with plenty of live rock and caves created to help this fish feel safe in it's environment. Though they are peaceful in nature, but will nip at and eat smaller ornamental Shrimp and even smaller fish as they grow larger. Tank mates should be large enough not to be eaten, but also peaceful. They are also best kept individually as they do not get along with other Hamlets. Once acclimated, the Yellowbelly Hamlet is extremely hardy and will become an ideal addition to your tank.
The Yellowbelly Hamlet is carnivorous and should be feed a diet of live vitamin enriched Mysis and Brine Shrimp, as well as finely chopped frozen or fresh meaty foods such as Squid, Shrimp, Clam, Krill and Fish and Crustacean flesh.
I ordered 2 yellow belly hamlets. Both arrived healthy and after 2 days both were eating. Then on the 3rd day they really showed their appetite. Really great fish that are out often. Reviewed by:   Richard on 07/25/2016