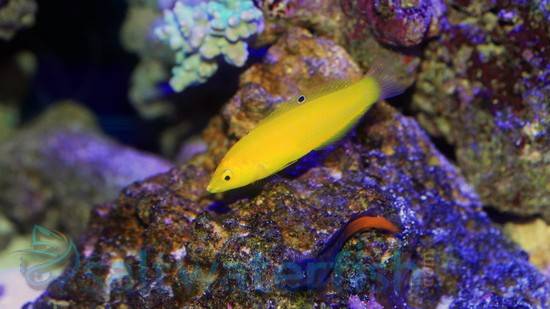 The Yellow Coris Wrasse, Halichoeres chrysus, features a slim yellow body with various black spots across its dorsal fin. It is also known as the Yellow Wrasse, Golden Wrasse, or Canary Wrasse. The Yellow Coris can be a beneficial tank member by eating flatworms and fireworms that are often nuisances. But may also nip at and eat smaller Shrimp, Snails, Clams, Feather Dusters and softer Corals, therefor caution is advised with keeping this Wrasse in a reef tank.
Their environment should include plenty of live rock for hiding places, a thick sandy substrate, and a tightly sealed lid to prevent escapes.
The Yellow Coris Wrasse requires a tank with thick sand bed, as they like to burrow themselves when sleeping or shy, as well as a tight lid to prevent escapes. An interesting fact: this Wrasse is known to "play dead".
This tiny wrasse is a delight. Reviewed by:   Krishna on 02/04/2016
My Yellow Wrasse arrived healthy and active. Very pretty fish, slight discoloration on it's side I am hoping will heal up/go away, otherwise in great condition. Reviewed by:   Joey on 03/16/2018