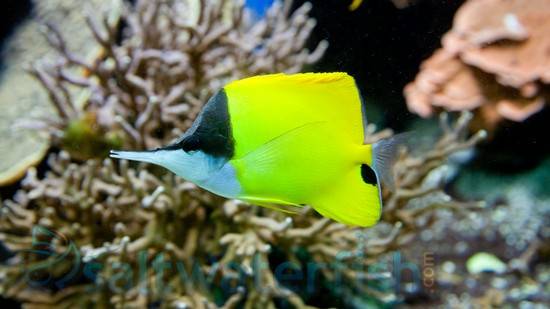 The Longnose Butterfly, Forcipiger longirostris, is commonly known as the Longnose Butterflyfish or Big Longnose Butterflyfish. With a brightly colored yellow body accented with a black face mask and a prominent eye-spot at the tail. But its most distinctive characteristic is the elongated snout. This Butterflyfish is one of the most suited-for-the-aquarium butterflyfish in the trade. It generally adapts to captive feeding quickly overcoming one of the most common problems of keeping Butterflyfish in the home aquarium. And once acclimated, they are extremely hardy, making them a great choice for beginners. Overall, this Butterflyfish is wonderful for a Fish only tank as it is one of the few Butterflyfish that does really well in the home aquarium. The Yellow Longnose Butterfly can grow up to 8.5 inches, and should be kept in a tank no less than 75 gallons if kept individually, and no less than 130 gallons if kept in a pair.  f keeping a pair, it is best to add both of them to the tank at the same time. The tank should also be well decorated with plenty of live rock, as it likes to inhabit rock overhangs and hide in the crevices. Like most Butterflyfish, the Longnose Butterfly will pick at inverts and corals so it is not considered reef safe. It will feed on Hard Coral Polyps and may also feed on Soft Coral Polyps as well as a variety of Invertebrates. Favorites include Polychaete worms like Tube Worms, Spaghetti Worms,  and the feet of Echinoderms like Sea Stars, Sea Urchins, Sand Dollars, and Sea Cucumbers, as well as the Sea Lilies or "Stone Lilies". They also enjoy Hydroids, Copepods, Barnacle cirri, Fish Eggs and more.  They are also known for getting rid of Aiptasia or Glass Anemones. They are peaceful, and are suitable to be kept with most fish species, but should not be housed with members of its own genus, or overly territorial species.  They Yellow Longnose Butterfly should be fed a carnivorous diet, consisting of live and frozen Brine Shrimp, Mysis Shrimp, finely chopped Crustacean Flesh, Shrimp, Krill, as well as Sponge Based frozen foods. They will also eat Japanese Nori. Feed 2-3 times daily for continued health. They will thrive in a temperature range of 70-81?? F and a pH of 8.1-8.4.