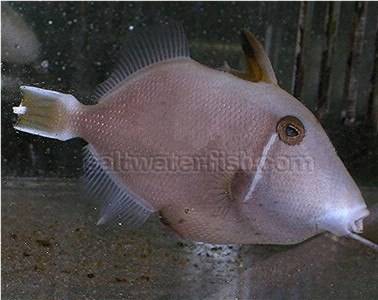 The White Tail Trigger, Sufflamen chrysopterus, is commonly referred to as the Half-moon Triggerfish, Yellow-backed Triggerfish, Goldenfinned Triggerfish, Yellowstreak Triggerfish, Yellow-backed Triggerfish, Blue Belly Triggerfish, Flagfin Trigger, White-tip Trigger, White-tip Sufflamen Trigger, White Rim Triggerfish, and White Rim Trigger. There is a large difference in appearance between adults and juveniles, where the juveniles have a white under-body, with the upper half separated by a black line that runs across the eye and has yellow coloration on top covering the dorsal fin. Adults are a dark color all over with red markings at the base of second dorsal fin and anal fin and blue coloration underneath the front part of its head.
The Flagtail Trigger grows a size of 9-11 inches as an adult and needs to be kept in a larger tank of at least 100 gallons. It is one of the intelligent and curious fish and requires a plenty of space to swim along with many hiding places in the tank. If not given a large community aquarium, it might turn aggressive. The Flagtail Trigger thrives well in a moderate temperate range, and often found vocalizing using a "grunting" sound. Since it might feed on corals, the Flagtail Trigger is not considered safe in reef tanks
The Flagtail Trigger chiefly feeds on a wide range of food items, including live coral, algae, sea urchins, crabs, mollusks and other invertebrate groups as well as small fish. They should be fed a diet of chopped Krill, Shrimp, Mollusks, as well as Clams ans hard shelled Shrimp to help wear down their ever growing teeth.