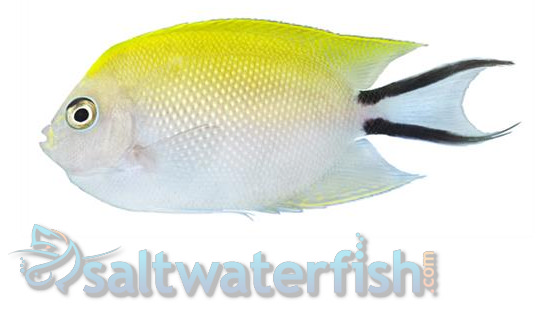 Very few fish show sexual dimorphism, out of those few the Japanese Swallowtail Angel, Genicanthus melanospilos, is one of them. Males feature a silver/white body with black vertical stripes across its body up to is head with yellow and blue markings on its forked tail. Females feature a snow-white body with a bright yellow splash on its back and a black stripe on the top and bottom of the tail. Since they are more peaceful than many other Angelfish, they can be kept as a mated pair, or in a small school of females. Avoid keeping two males in the same tank, as it can lead to extreme aggression.
These Angelfish are also unique in the way that they are reef safe, and will not nip at soft and stony corals, or sessile invertebrates, making them a great choice for an Angelfish in a reef tank setting. Diet should include a variety of spirulina, marine algae, high quality angelfish preparations, mysis and brine shrimp, 3 times daily.
Beautiful fish!! I have had a female for years, always been my favorite fish. This male I just received will be the first fish to give her competition. Reviewed by:   Jarett Shea on 08/05/2013