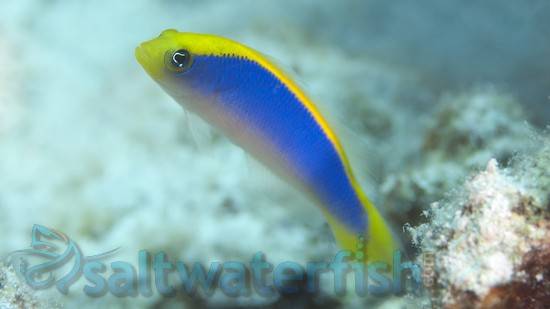 The Sunrise Dottyback is a bright blue fish with a yellow dorsal stripe from snout to tail, and a white ventral area.
Dottybacks are a group of small, colorful basslet-like fish that inhabit the crevices and small caves of the coral reef.  Dottybacks can be kept in smaller aquariums, although larger tanks with plenty of live rock are preferable. They are territorial and will defend the area they have claimed as home quite aggressively.
Dottybacks vary species by species in aggressiveness, and care should be taken when deciding which to introduce to an aquarium community.  Dottybacks are easy to feed, and frozen foods such as Mysis shrimp or Brine shrimp are readily accepted. They are also known to feed on small bristle worms, and have been introduced to tanks to help control excessive bristle worm populations.
The family of Dottybacks are well known for their elusive nature. These fish tend to stay within their crevice or cave until it is time to feed. Their color is usually quite dramatic and they are capable of changing their sex.