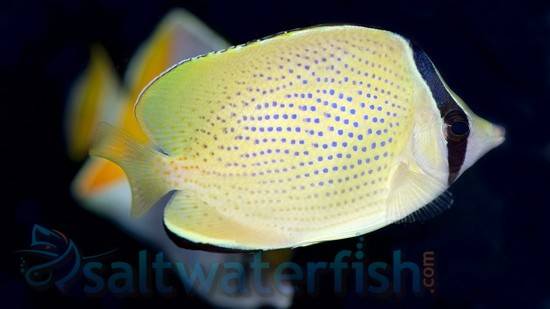 The Speckled Butterflyfish, Chaetodon citrinellus, is also known as the Citron Butterfly, Lemon Butterfly, Speckled Coralfish, and Speckled Butterfly. It features a sleek pearl-white body with scattered blue spots, a black eye band, and a yellow-tinged dorsal and tail fin. Mostly nocturnal, the Speckled Butterfly is best kept in mated pairs or small groups - though larger groups need to be kept in larger tanks. If a mated pair is kept, they should be introduced to the tank at the same time to avoid territorial aggression.
Tanks should be at least 100 gallons with plenty of live rock hiding places. The Speckled Butterfly should not be housed with vulnerable corals or inverts as they may nip and also should not be housed with aggressive tank mates. Sometimes difficult to feed in captivity at first, this species will slowly acclimate to aquarium feeding strategies. Diets should be varied and include both plant-based and meaty foods. The Speckled Butterflyfish thrives well in a temperature range of 72-82??F and pH of 8.1-8.4.