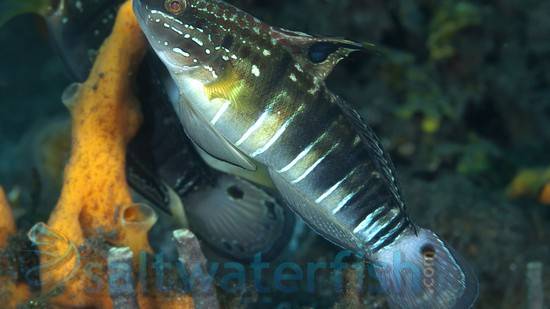 The Sleeper Banded Bullet Goby, Amblygobius phalaena, also known as the Brownbarred Goby and the Bullet Goby features a spectacularly patterned body. It has a yellow/white head with blue, orange, and brown dots and stripes across a grey body. This fish provides an electric splash of color into your aquarium. They thrive best in tanks with plenty of live rock, a sandy substrate, and a tightly sealed lid to prevent escapes. Generally, the Sleeper Banded Bullet should not be kept with members of its own species. They will feed on a varied carnivorous diet as well as some filamentous algaes at least three times per day for continued good health.
this guy is peaceful no problems and super entertaining..he puts sand in his mouth and pushing it out his side gills he is a winner for for any tank Reviewed by:   Ashley House on 05/14/2012
great fish good size very healthy bot I would not call it reef safe ihad to get reed off it because it kept putting the sand on the corals all over the tank and you know thatwill kill them Reviewed by:   frank roldan on 08/21/2014
The fish I received was of good size and excellent health. I had a previous Sleeper Banded Bullet who lived for years and I was sad to see him finally go. But this new one acclimated very well and is good fit for my tank and the gravel/sand is also better for having him/her. Reviewed by:   Randy Fasnacht on 02/18/2015
The fish I got was 4" and very healthy. He has claimed and tiny crevice in the rockwork, but never harms any other fish in defending it. I have also run into the problem of him spitting sand all over any low-lying corals. He does do a good job of sifting the sand for any leftover food. Reviewed by:   Andrew on 05/05/2015