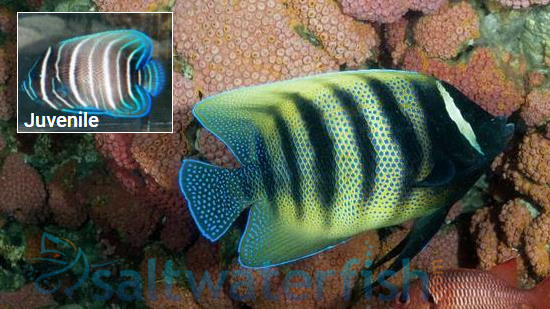 The Six Banded Angelfish, Pomacanthus sexstriatus, also known as the Sixbar Angel or Sixband Angel, features a strong visual differentiation between its juvenile and adult stages. As a juvenile, the Sixband Angel vaguely resembles the Koran Angel with its black/blue body and vertical white stripes, including a thick white stripe behind its eye. As the Six Banded Angel matures, its body transforms into a beautiful green/brown color with black stripes and blue polka dots across its tail and body.
It is a hermaphroditic angel meaning it is very difficult to distinguish males and females. They can grow large and require at least a 180 gallons tank with plenty of swimming space and live rock to thrive. They can be prone to picking at soft corals and sessile inverts so be cautious with what you select as tank mates. This angel will eat an omnivorous diet of quality Spirulina, flake foods, meaty frozen preparations, and angelfish-specific foods.
Overall, this is one of the most beautiful Angelfish species, both in its juvenile and adult stages, and makes for a great addition to any FOWLR tank or any reef tank with the right pairs.