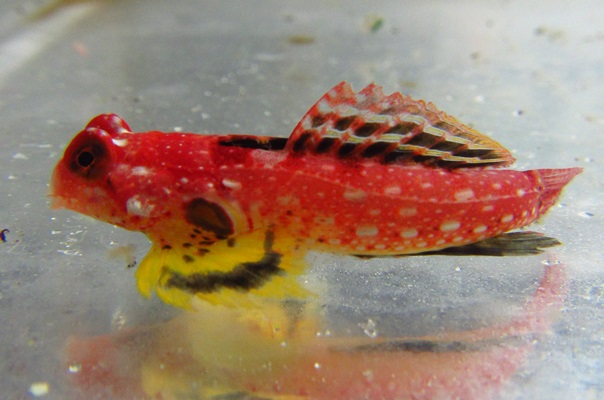 The Ruby Red Dragonet, Synchiropus sp., also known as the Ruby Red Dragonet, is a gorgeous, brilliantly colored reef-safe blenny. Featuring a ruby-red body, with mottled white spots and intensely yellow pelvic fins with stark black lining across its fins. The Ruby Red Dragonet is unparalleled in its appearance and backs it up by being reef safe and friendly, and should be housed with other reef safe, and peaceful tank mates. You cannot have enough live rock for this species, as it will spend much of its time perched, showing off its beauty, and hopping across the tank floor. Te Ruby Red Dragonet can reach a size of 2 inches, and should be kept in a tank no less than  20 gallons if kept individually, and no less than 40 gallons if kept in a pair. The tank should also have a secure and tightly fitting lid, as they are known for jumping and "scooting" out of the tank through small openings along tubes or wires. They have small protruding mouths used to capture microfauna such as Copepods and are similar to the popular Mandarin Dragonet.

The Ruby Red Dragonet's diet consists mainly of Copepods - so it is best suggested to introduce them into an established reef tank with plenty of live rock, and an ample Copepod colony. In addition, offer finely chopped meaty preparations such as vitamin-enriched Brine shrimp, finely chopped Mysis shrimp, finely chopped Krill, Clams and Crab flesh. Their mouths are very smell, so be sure to make the preparations small enough for the Ruby Red Dragonet to eat. They will thrive at a temperature range of 75-82??F and a pH of 8.1-8.4.