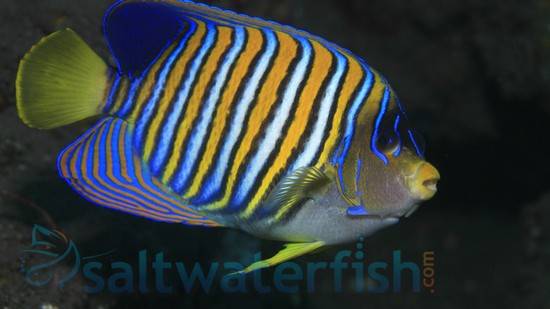 The Regal Angelfish, Pygoplites diacanthus, also known as the Royal Angelfish or Royal Empress Angel, features a beautiful display of colors and stripes. Its body is a mosaic of orange, silver and blue with a bright yellow tail with electric blue markings on the face and blue and orange striping on the fins. Like many large Angelfish their appearance will change dramatically from the juvenile to adult stage. Due to aggression towards other Angelfish they are best kept singly but will do well with other larger fish.
They are not reef safe, as they will nip at soft and stony polyp corals, sessile invertebrates and clam mantles. Diet should include a variety of spirulina, marine algae, high quality angelfish preparations, mysis and brine shrimp, 3 times daily.
NOTE: This specimen will have the same coloration with the exception of the prominently yellow belly

Umbrella Leather: No B