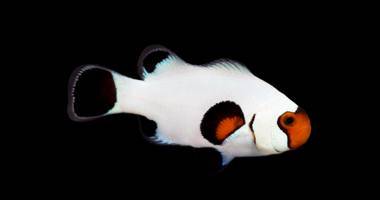 The Proaquatix Wyoming White Clownfish are a variant of A. ocellaris that have a significant amount of white on their body. The Wyoming White clownfish is almost entirely white, but does have orange on its face and in some cases its pectoral fins. Each Snowflake is evaluated by an experienced grader for the percentage of white and the attractiveness of the striping. Just as their name implies - no two are alike. This Wyoming White Clownfish is aquacultured by Proaquatix located in Vero Beach, FL.
The Wyoming White Clownfish is a very popular fish and will get along with other Clownfish in the same aquarium, depending on the size of the aquarium. It is also one of the first marine aquarium fish to be bred successfully in captivity. They do extremely well in the aquarium and are very peaceful.
The Wyoming White Clownfish does not need an Anemone to survive, but will accept many different Anemones as its host, including corals. Their favorite Anemones to call home are the Carpet Anemones Stichodactyla Gigantea or the Magnificent Anemone Heteractis Magnifica.
These fish will accept most fish foods and are perfect for reef tanks. More than one can be kept in the same aquarium and they prefer to be kept in groups.
Clownfish have a very distinct swimming motion that is different from most fish. This is likely passed on through their genetic makeup from centuries of wiggling within the tentacles of Anemones. As the Clownfish wiggles within the stinging tentacles the Anemone's mucus is likely smeared over the Clownfish's body, which then protects it from additional stings.
In the wild they live in small groups with one large dominant female, one smaller sexually active male, and a handful of smaller males and juveniles. When the female is lost the largest male will then change sex and become the dominant female with the other Clowns moving up the ladder behind it.
I love these guys! They were super active right from the start and they are beautiful and super healthy. Out of the two one looks exactly like the picture. The other has a little bit of black on the body but he has such a great personality. I've had them for about a week now and I couldn't be happier. Reviewed by:   Erin on 05/06/2017
Very good Clownfish beautiful so far very fun to have happy with my order! Reviewed by:   Loan Dao on 07/11/2017