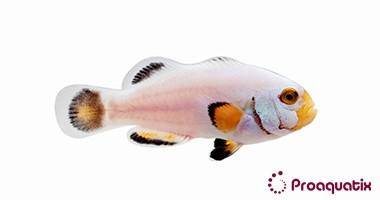 The Platinum Percula Clown, Amphiprion percula, is a variant of the percula that features a white body but with none of the original bands, an orange face and as it matures it develops vivid black fins that create a striking contrast against the platinum body. They are social and peaceful with other species, and can even be kept in a school if the tank is large enough, though they may become aggressive towards other genus of clownfish. They are very hardy and a great choice for a beginner.
Clownfish are reef safe and can be kept with non aggressive invertebrates and corals, and most clowns will host an anemone present in the tank. Diet should include a variety of frozen and live mysis and brine shrimp as well as spirulina, marine algae, nori, and algae based foods, 2-3 times daily.
Love these guys. So cool to look at. Very healthy and active. Reviewed by:   Stephen Whitney on 09/02/2014
Love this white Percula Clownfish! It is very active, Perfectly fine swimming by himself. Does not associate with the other clowns.Very happy and heathy. Reviewed by:   Esther Murphy on 07/24/2017