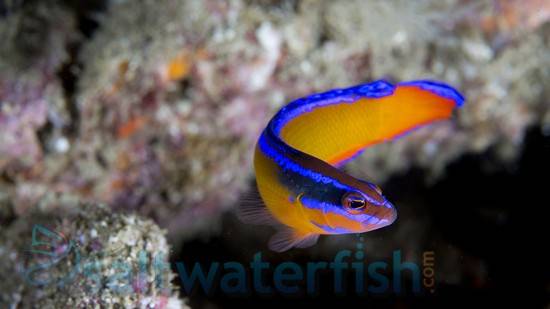 The Neon Dottyback, Pseudochromis aldabraensis , is an orange colored with vibrant neon blue lines trimming the length of its body and on its face. Dottybacks are a group of small, colorful basslet-like fish that inhabit the crevices and small caves of the coral reef. Dottybacks can be kept in smaller aquariums, although larger tanks with plenty of live rock are preferable. . The Neon Dottyback, like most Dottybacks are known for jumping, so a tightly sealed lid is suggested to prevent jumping from the tank.
They are territorial and will defend the area they have claimed as home quite aggressively. Housing several dottybacks depends on the size of the tank and the amount of hiding places available. They are best kept with Tangs, large Damselfish, Hawkfish, Dwarf Angelfish, Parrotfish and other large fish that can hold their own in the tank.
what a stunner! this fun, inquisitive moderately aggressive fish is a darting splash of color that ranges around the tank. acclimates easily and quickly blends in. does like a piece of rock to call home, which it will tend to retire to at night. very pleased... Reviewed by:   john on 07/31/2014
great little fish as advertised. Reviewed by:   joseph h shotwell on 09/06/2014
Reviewed by:   darcitananda on 09/18/2014
Reviewed by:   Mary Stone on 10/07/2014
Reviewed by:   DP on 10/08/2014
One of my Favorites. Stunning color. Great personality Reviewed by:   Tylan Hansen on 10/02/2019