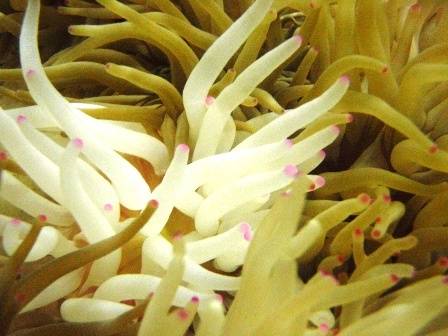 Condylactis Anemone: The Pink Tip Haitian also known as the Pink-Tip Condy. It has a red column with long, tapering, pink-tipped tentacles. The tentacles may occasionally develop a bubble-like appearance. Generally it likes to bury the base in the sand or into the crevice of a rock for protection.

The Pink Tip Haitian requires strong light as well as live rock and several crustaceans. Although Haitian Reef Anemones requires a reef style environment, they are not ideally suited for the reef aquarium containing corals. Haitian Reef Anemones move around the tank and have a sting that can inflict grave damage to other anemones and corals.

Unlike other anemones, the Haitian Reef Anemone does not have a relationship with any particular fish.

when I got this I thought for sure, I would be making a claim for it dying, but to my surprise, when I put it in the tank, it was fine, within an hour it plumped right back up and it is doing great. Im so glad I bought this. I actually wished I would have bought more. Reviewed by:   kassy on 12/15/2014
The Pink Tip Anemone is very happy in my tank It has done a lot of moving around which is typical for anemones. I think it has finally found its stop. My clown fish still has not yet taken to the Anemone, but it can take several weeks for that to happen so I am still waiting. Reviewed by:   Mike Juice on 02/12/2015
BIG beautiful orange body with white anttenacles with purple tips an attractive addition to my aquarium Reviewed by:   Andrew Cookerly on 07/09/2015
Beautiful guy. Moves around a lot . loves hand feeding. Nice addition ...everyone always says wow what is that? Reviewed by:   Gina Schempp on 03/27/2016