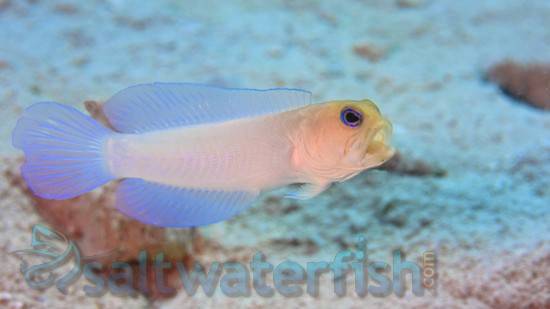 The Pearly Jawfish, Opistognathus aurifrons, also known as the Yellowhead Jawfish, Yellow-Headed Pearly Jawish, and the Yellow Head Jawfish,  features a light-yellow head with a muted blue/green body. The Pearly Jawfish is a hardy species that requires a tank with plenty of live rock and a deep sandy substrate to burrow in (around 5-7 inches). The Pearly Jawfish can sometimes be seen "dancing" up and down in its burrow which makes for a fun fish to watch. It is a mouth-breeder which means it will hold eggs in its mouth. Eating a carnivorous diet, the Pearly Jawfish feeds on mainly brine and mysis shrimp and other meaty preparations.
This little started burrowing right away! Really cute to see him "standing" outside of his hole. He's very curious and industrious. Nice pearly sheen on him too. Reviewed by:   Emily Huang on 02/14/2014
Love, love this goby! It is amusing to watch as it peeks out of its burrow. Real cute!! Reviewed by:   Esther Murphy on 08/07/2017
One of my favorite fish in my tank! Tons of personality. Fun watching her pop up from her burrow. Very pretty fish Reviewed by:   Ellen Lucas on 08/14/2017