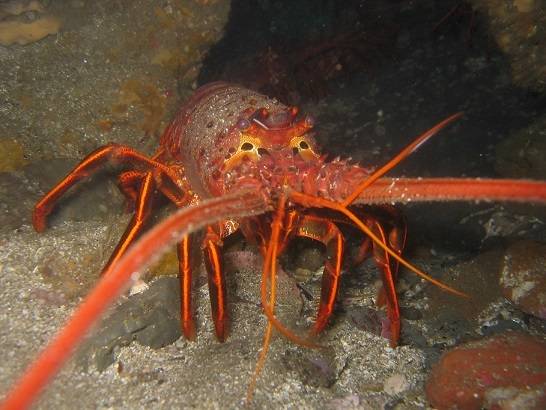 The Orange Spiny Lobster, Enoplometopus sp., also known as the Debelius Reef Lobster, features elongated defensive claws with a bright orange body. It is a peaceful species that spends its time hiding among the live rock caves during the day, and prefers a sandy substrate. They are nocturnal and may hide out for days right after they have molted. They will benefit from iodine supplements to aid in the molting process, and can grow to a maximum of seven inches.
The Orange Spiny Lobster is carnivorous, and while it is considered reef safe, it should be monitored around inverts such as Clams, Snails, Crabs and Urchins, as the Lobster has been known to include these animals in their natural diet, while also scavenging for left over food and algae. They will otherwise be peaceful towards fish and Corals. It is also important not to house the Orange Spiny Lobster with any other lobster species as they can become territorial and aggressive.