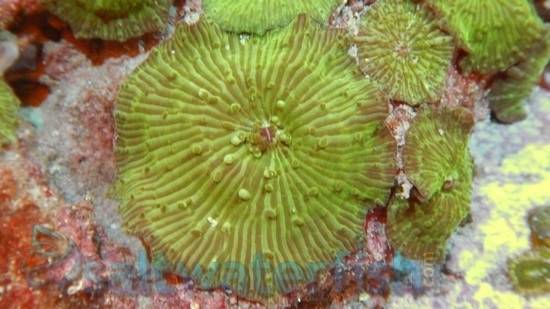 Mushroom Corals, Discosoma sp., are often incredibly colorful coral that resembles what we think of as a terrestrial mushroom. Mushroom Corals require less light and some are capable of absorbing nutrients directly from the water column and can be voracious and aggressive eaters even devouring small fish at times. It is advised to leave plenty of space between it and other corals as well. In general, Mushroom Corals requires low to moderate water flow and low to moderate lighting and to be held in a reef aquarium.
These corals can propagate quite quickly, so allow plenty of space for growth. These corals look especially amazing under actinic lighting. Sometimes Mushroom Corals will close up after being introduced to the tank, but have patience as they will reopen when they have acclimatized. Mushroom Corals are generally easy to care for making them great addition.