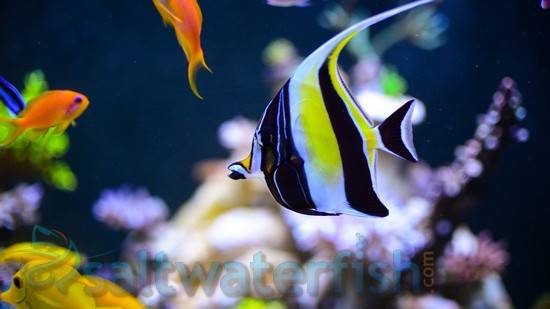 The Moorish Idol, Zanclus Cornutus, is without question, one of the most striking and beautiful fish offered for the home aquarium trade. The Moorish Idol stands out in contrasting bands of black, white and yellow, and an elegant filamentous dorsal, that if damaged, can grow back quite quickly and easily. This fish can grow to be 7" in length, and should be kept in a tank no less than 125 gallons if kept individually, and no less than 200 gallons if kept in a mated pair. Due to it's extreme social need, it is best to keep a mated pair in one aquarium. This will help with acclimating as well as the success for survival.
Space is absolutely essential for keeping this species successfully, so they should also be provided with plenty of unobstructed swimming space, as well as ample hiding places to take refuge when feeling threatened. The tank should also be well established, with plenty of algae for grazing in between meals, as well as excellent filtration and vigorous water movement, to help promote pristine environment conditions.
The Moorish Idol is not an Angelfish, nor a Butterflyfish, but rather a close relative of the Acanthruidae or Surgeonfish family, and should not be kept with other Tangs, Surgeonfish or Rabbitfish to avoid aggression. And since they are so closely related to the Acanthruidae family, they are also easily susceptible to biological disease, and that is why they require such pristine conditions to thrive. Copper medications should also be avoided, instead use quinine-based medications if necessary. Moorish Idols will often pick at LPS corals, and certain soft Coral Polyps, as well as other types of Sessile Invertebrates, or maybe even Motile Crustaceans.
For fish that refuse to eat, to survive in captivity live rock that is rich with coralline algae and sponge growth may be needed to stimulate their desire eat, and help with the ease of acclimation.  The Moorish Idol is Omnivorous, and should be fed a diet consisting of finely chopped meaty preparations such as Mysis Shrimp, Vitamin Enriched Brine Shrimp, as well as Spirulina and fresh terrestrial greens that have been blanched with.  Sponges should also be offered in their diet to promote continued health, along with Vitamin Enriched Flake and Pellet foods, they should also be fed several times daily. The Moorish Idol will thrive in a temperature range of 77-82°F and a pH of 8.1-8.4.
Note:Keeping this fish can be quite difficult, due to their unpredictable feeding behavior, so we recommend only expert aquarists for this species.
Beautiful healthy fish. Eating spectrum on first day in QT. highly recommend. Reviewed by:   Richard Ohlund on 03/03/2018