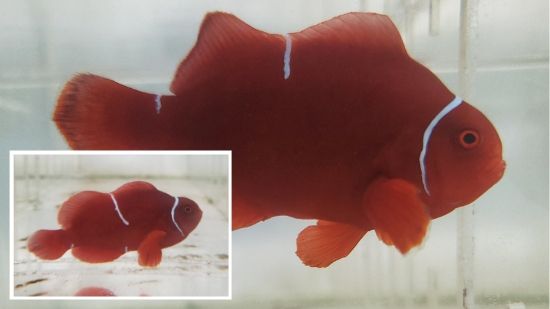 The Maroon Clown, Premnas biaculeatus, is one of the most visually impressive clown fish out there. This particular species is captive bred and tank raised. Its deep garnet coloration makes for a beautiful clownfish species.
The Maroon Clown is, like most other clownfish, a relatively easy fish to care for with the captive bred specimens being even most accustomed to surviving in the tank environment - this species was born and raised in the tank. If introduced at the same time this fish can be kept with other captive bred clownfish. As an aggressive eater, the Maroon Clown will eat most frozen meaty foods as well as herbivore diets. If you are able to get a fish of this quality into your tank, the Maroon Clown's hardiness will allow it to be a staple member of your tank.