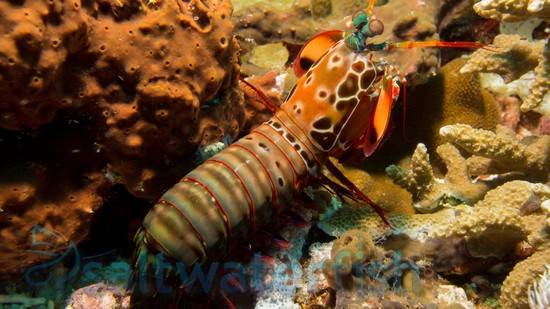 The Peacock Mantis Shrimp, Odontodactylus scyllarus, should be kept in a species-only tank. They are very aggressive, beautiful, and extremely entertaining to watch.They should be supplied with ample live rock to provide shelter, as well as a deeper sandy substrate to allow the Mantis Shrimp to burrow.
The Peacock Mantis Shrimp have highly developed abdomens which allows for quick movement. In order for Mantis Shrimp to grow they need to shed their exoskeleton, a process called molting, which allows them to remove their restricting shell and begin a new one. Often times in the home aquarium Shrimp will leave this translucent shell in full view so it can serve as a distraction while the Shrimp finds a hiding place and allows its new shell to harden. For
The Peacock Mantis Shrimp has extremely powerful claws earning them the nickname of thumb-splitter, so use caution when handling this Shrimp. Their claws help them to break the shells of their prey, therefor they should not be kept with smaller Shrimp, Crustaceans and even smaller fish, as they will become food for the Mantis Shrimp. They should be fed a carnivorous diet consisting of chopped meaty preparations such as Krill, Crustacean Flesh, Squid, Clams, and will also accept live feeder Shrimp. They are also very sensitive to copper medications, and quick changes in water perimeters.