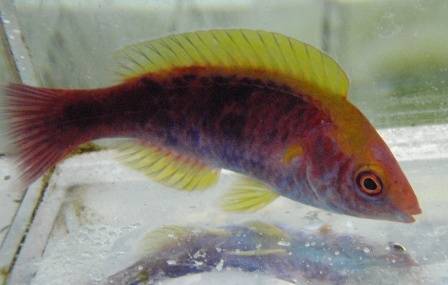 The Tricolor Fairy Wrasse, Cirrhilabrus lubbocki, also known as Lubbock's Fairy Wrasse, looks brilliant in any reef tank. It is small, hardy and friendly towards other fishes, and adapts well in captivity and is easy to care,  for which makes it a very good choice for a beginner aquarist, and a great addition to any reef tank. Though the male Tricolor Fairy Wrasse is a bit more aggressive, unlike the females who are quite peaceful. If you are wanting to keep a mated pair, it is better to introduce the female before male. Otherwise the male will become aggressive towards newly added females. The Tricolor Fairy Wrasse can reach a max size of about 3", and should be kept in a tank not less than 30 gallons. If keeping a pair, it is best to keep them in a larger thank of about 50 gallons.
This Wrasse is completely reef safe, meaning it will not touch corals or bother any  invertebrates in the tank. They will best thrive in a well-established tank, with live rocks cleverly arranged to provide hiding places, as the Tricolor Fairy Wrasse can become shy and may need to take refuge as needed. They are also known for jumping, so it is suggested to have a tightly fitting lid, or top on your tank to prevent escape.
They will also thrive in a temperature range of 72-82 degree Fahrenheit, and pH of 8.1-8.4. The Tricolor Fairy Wrasse should be fed a varied diet of meaty foods, including vitamin enriched Mysis and Brine Shrimp, along with frozen and chopped meaty preparations. Soaking the meaty foods in garlic will also entice the fish to eat, as well as boost immunity. They will also feed on Copepods present in the tank.