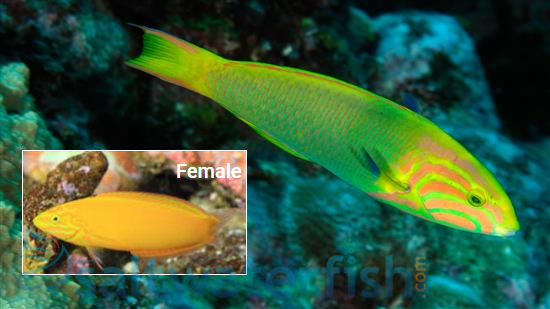 The Sunset Wrasse, Thalassoma lutescens, has a multitude of common names including the Banana Wrasse, Lime Green Wrasse, Lime Green Sunset Wrasse, Yellow-brown Wrasse, or Yellow Wrasse. It features unique green facial markings with yellow/brown/green striping across its body.
Like other wrasse species, it is best kept in a tank with a tightly sealed lid to prevent escapes, plenty of live rock hiding places, and a sandy substrate.
They are relatively reef safe species if paired with suitable tank mates. They will feed on a carnivorous diet consisting of small sessile inverts, crustaceans, and sometimes even diminutive fish. Be cautious when pairing with inverts. However, they will hunt those pesky bristle worms to great effect.
The Sunset Wrasse is a beautiful wrasse species that will thrive in most FOWLR tanks and will spend its time actively exploring live rock structures.