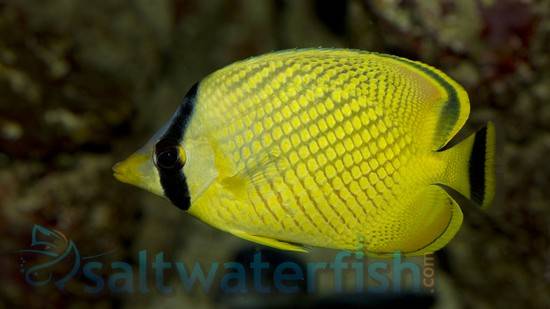 The Latticed Butterfly, Chaetodon rafflesi, also known as Raffle's Butterflyfish, features a strong yellow colored body, dark scales, and dim lines creating a lattice-like appearance. Often, there is a brilliant black eye band and blue patch between its eyes.
Growing a maximum of 6 inches, the Latticed Butterfly is best kept in a tank of at least 70 gallons as an individual or 120 gallons if keeping multiples. Pairs should be added at the same time to curb territorial aggression. They also prefer tanks with plenty of live rock, algae to graze on, and open swimming space.
The Latticed Butterfly is generally not considered reef safe as they can become territorial with other Butterflyfish or aggressive fish and can be prone to preying on small sessile inverts like tube worms, clams, and anemones. They can, however, be beneficial predators in combating pesky bristle worms and aiptasia. They should be fed an omnivorous diet consisting of live, frozen, and flake foods twice daily.