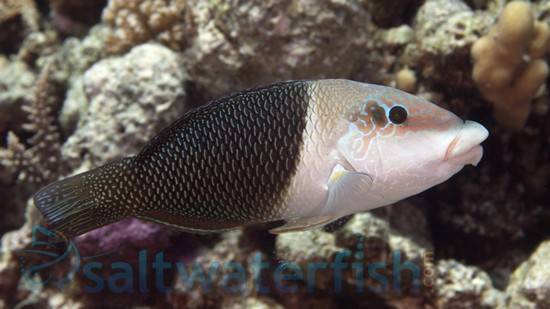 The Half & Half Wrasse, Hemigymnus melapterus, also known as the Banner Wrasse, Banner Half & Half Wrasse, Maori Wrasse, Thicklip Wrasse, Blackedge Wrasse, and Blackeye Wrasse. Featuring a stunning black scaly back half of its body with a gorgeous silvery face with vague blue stripes and thick lips.
They can grow up to a max size of 20 inches, and are best kept in large aquariums of at least 150 gallons with plenty of live rock, a thick sandy substrate to allow for burrowing, and a tightly sealed lid to prevent escapes. The Half & Half Wrasse is not considered reef safe, as it may become aggressive towards smaller fish, and eat small ornamental inverts, but will not harm Corals. They have also been know to eat worms present in the aquarium, such as fan worms and bristle worms.
The Half & Half  Wrasse may be shy upon first being introduced to the aquarium, and may be finicky about eating, or may not eat at all for a few days. However, after this Wrasse is comfortable is it's new environment, it will accept food and become quite hardy. They should be fed a varied carnivorous diet, consisting of Clams, Feeder Shrimp, Snails and Crabs, as well as chopped Squid, Scallops and Crustacean Flesh. They will thrive in a temperature range of 72-78°F and a pH of 8.1-8.4.
Note: Due to its difficulty in eating habits, the Half & Half Wrasse can be difficult to care for in the home aquarium, and should be reserved for experienced aquarists only.