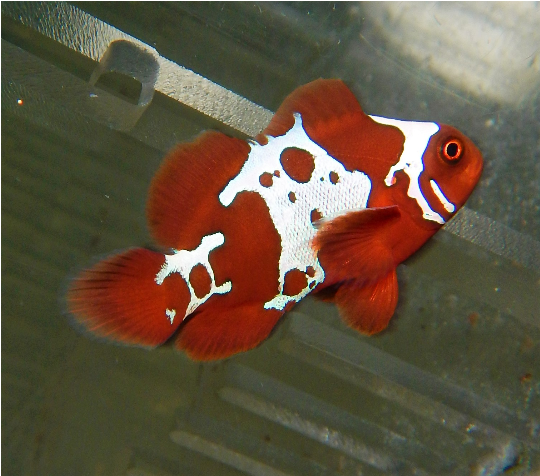 The Gold X Lightning Maroon Clown, Premnas biaculeatus, is a variant of the Gold Stripe Maroon, featuring a maroon body with exaggerating barring often almost forming an X like pattern. Like all gold stripe maroons, the stripes will appear white and turn to gold as they mature. They are social so they can be kept in a school if the tank is large enough, but are known to be a little more aggressive than most clownfish and will become aggressive towards other genus of clownfish.
Clownfish are reef safe and can be kept with peaceful invertebrates and corals, and most clowns will host an anemone present in the tank. Diet should include a variety of frozen and live mysis and brine shrimp as well as spirulina, marine algae, nori, and algae based foods, 2-3 times daily.