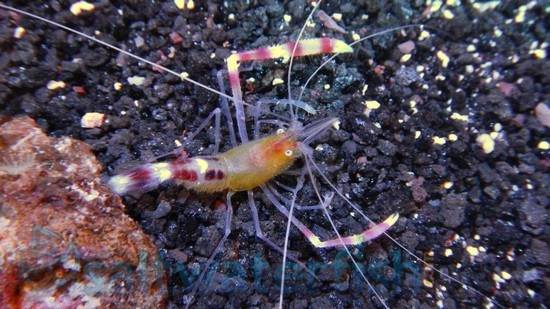 The Gold Coral Banded Shrimp, Stenopus hispidus, is a beautiful colored variation of the traditional Coral Banded Shrimp. They are relatively rare in the aquarium trade and are supplied to Saltwaterfish.com in small quantities. They can be highly productive tank members as they are known to devour the pesky bristle worms. Given their voracious appetite,the Golden Coral Banded Shrimp will eat almost anything. More than one of these species should not be kept together unless they are a mated pair.
The Golden Coral Banded Shrimp will hang out among the rocks so they are best kept in tanks with plenty of rockwork. They will frequently lose their exoskeleton during a molting process as they grow. Golden Coral Bandeds can actually provide a little bit of a pinch to humans so be careful when handling. Overall, they are one of the most fascinating shrimps to watch as they are incredibly active, attractive, and proficient predators.
Arrived perfectly. Doing very well. Reviewed by:   Debbie Dublo on 11/14/2016
He lost his claws in shipping, they were in bag with him, but after about 3-4 days they are back and he is looking good! I like the different color of the golden. Reviewed by:   Shannon on 01/23/2017