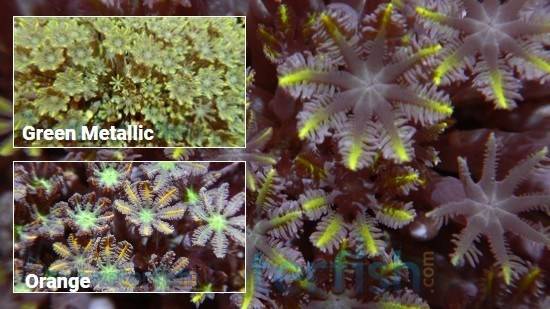 The Glove Polyps, Clavularia sp., often referred to as the Eight Tentacled Polyps or the Encrusting Polyps, are colorful corals with distinctive eight-leaved polyps. They are individuals that form together to create discrete colonies on pieces of rocks. Glove Polyps are especially susceptible to other corals' stingers so it is recommended that ample space is kept between Glove Polyps and other coral species. They are relatively easy to maintain and can actually spread rapidly onto other rock colonies in the right tank environment. Glove Polyps should be kept with moderate lighting, moderate waterflow, and be placed in the middle of the tank. They feed off of photosynthetic algae that Glove Polyps host, but will also readily take direct feedings two to three times a week. Glove Polyps make a unique and easy to care for addition to most tanks.
NOTE: This particular specimen has an orange coloration.