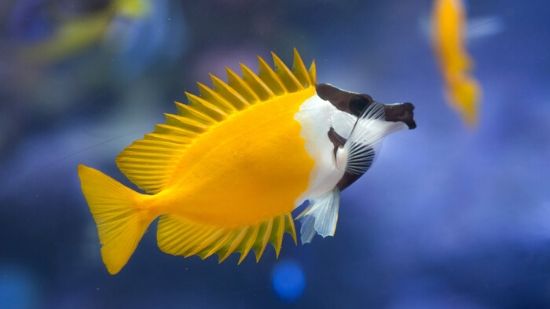 The Foxface Rabbitfish, Siganus vulpinus, is also known as the Foxface, Common Foxface, Foxface Lo, and Venomous Foxface. Its characteristic yellow body and black and white face make the Foxface instantly recognizable. It is easily confused with Siganus unimaculatus, but the Foxface lacks the large black spot of the One Spot Foxface. The Foxface has a number of venomous spines atop its dorsal fin - care should be had while handling it. The Foxface needs a tank of at least 40 gallons with plenty of free swimming space. It is best housed with peaceful or semi-aggressive fishes and should not housed with other rabbitfishes. Pairs can sometimes do well. If underfed, the Foxface can nip at some corals. During acclimatization, they can sometimes appear discolored - this is common and not indicative of illness, just stress. They will eat a herbivorous diet consisting mainly of algae and algae-based foods. Overall, the Foxface is a staple of marine aquariums for good reason; it is a hardy, active, and beautiful fish.
Fantastic fish in every way! Easy to acclimate, eats immediately, fun to watch, will clean away algae like u wouldn't believe!!! Just don't even corner, cause they might stab you, but that will ONLY happen if u force them too! They're extremely docile, and won't stress out new fish. One of the better fish around, as long as u don't have a pretty small tank Reviewed by:   Lawrence Page on 10/09/2016
Overall great fish. Even better at eating algae than tangs! Venomous spines, but easily avoided, just be careful if netting. Very hardy, acclimated easily, and totally peaceful. Smallest of the rabbitfish, and most tangs, but still reaches 7"ish. Reviewed by:   Lawrence Page on 12/10/2016