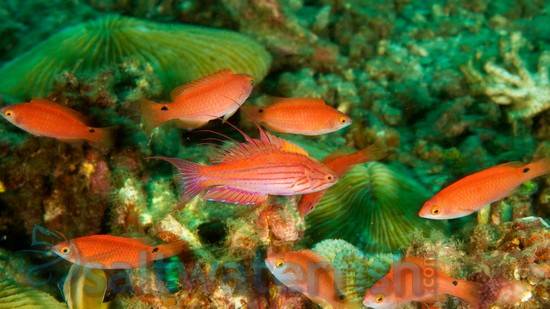 The Filament Flasher Wrasse, Paracheilinus filamentosus, also known as the Filamented Flasher Wrasse, Filament-fin Wrasse, Filamentous Wrasse, Whip-Fin Fairy Wrasse, and Filamentous Flasher Wrasse. This wrasse is characterized by its extraordinary filamentous appendages extending from its dorsal fin. Sometimes extending two inches from its body, this filamentous tissue is unique to this species of wrasse.
It is best housed in a tank  with plenty of free swimming space, live rocks to hide in, a sandy substrate, and a tightly sealed lid to prevent escapes. They can be kept in mated pairs, but the females should be introduced to the tank first.