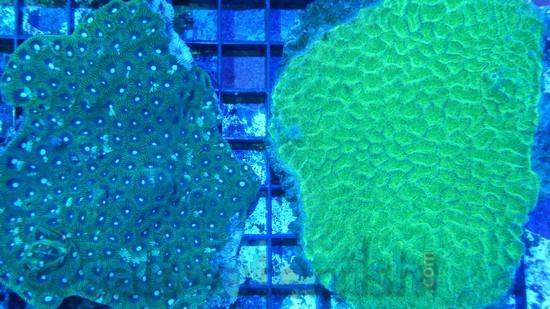 Favites Brain Corals, Favites sp., are also known as the Honeycomb Coral, Pineapple Coral, Moon Coral, Closed Brain Coral, Closed Pineapple Coral, Star Coral, and Worm Corals. They have fleshy colored polyps that hide its skeleton. This coral gets its name from the various folds and crevices that seemingly resemble a brain. Favites Brain Corals are one of the most popular corals for beginner aquarists as it is incredibly hardy and easy to maintain. This coral requires its own space and should be kept away from other corals as it can sting them its sweeper tentacles which come out at night. The Favites Brain Corals should be fed a carnivorous supplemental diet twice weekly consisting of small marine inverts. They best thrive with moderate light and waterflow. Overall, the Brain Coral is one of the most popular types of coral in the home aquarium trade due to its hardiness and uniquely beautiful patterns and colors. This particular specimen has hints of metallic colors among its general green coloration.
NOTE: This specimen is red in color.