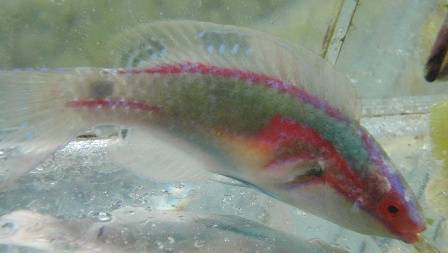 The Exquisite Wrasse, Cirrhilabrus exquistus, has a beautiful pale gray-green colored body along with vivid pink and blue markings. Males tend to exhibit a more vibrant coloration pattern than females. It features a black spot at the base of the tail, which makes it a different fish in the tank. Coloration can vary, depending on maturity and geographic region. The Exquisite Wrasse makes a beautiful addition to any tank.
The Exquisite Wrasse grows up to 5 inches and should be kept in an aquarium of no less than 70 gallons. We suggest an aquarium with plenty of live rock to create many hiding places so that it can take refuge there when threatened or stressed. Like many other Wrasses, the Exquisite Fairy Wrasse is known for jumping, so a tight fitting lid is also suggested. Since this Wrasse does not pick on corals or invertebrates, the Exquisite Fairy Wrasse is an ideal fish for a reef tank. Though the Exquisite Wrasse is peaceful in nature, it becomes aggressive with fish of the same species, such as other Wrasses.
the Exquisite Fairy Wrasse should be fed a varying diet, consisting of vitamin enriched frozen Mysis shrimp and Brine Shrimp, along with chopped meaty preparations and a high quality marine flake and marine pellet food. Once acclimated, this Wrasse is quite hardy and easy to care for, making it a great choice for beginners. The Exquisite Wrasse thrives well in a temperature range of 72-78°F and a pH of 8.1-8.4.