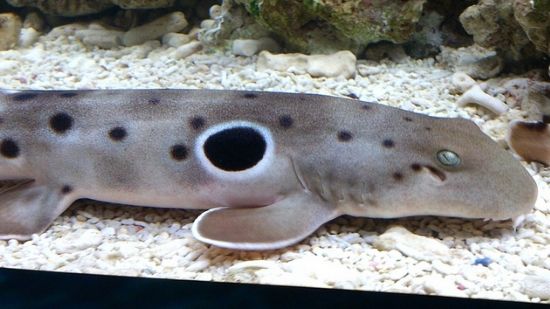 The Epaulette Shark, Hemiscyllium ocellatum, is found off the coastal waters of Australia. It features large black spots flanking either pectoral fin. It has a slender body, short head, and usually grows to a maximum of under 1 meter. They are often nocturnal choosing to feed on small meaty foods found on the bottom of the ocean/tank. They can actually function as a beneficial sand sifter. The Epaulette Shark requires a large tank.
The Epaulette Shark is widely regarded as the best shark suitable for the home aquarium. They can breed and require only a minimum 200 gallon tank. They should not be kept with small fishes or inverts however.