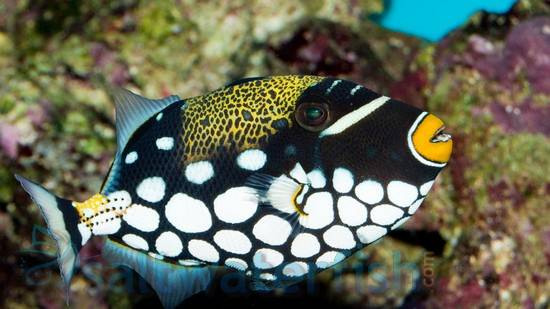 The Clown Trigger, Balistoides conspicillum, has one of the most recognizable body colors and patterns of all marine fish. Its dark body with bright white dots, yellow tail and nose, and other yellow spotting makes for a visually unique and astonishing fish. The Clown Trigger would almost certainly be a star in your tank. However, the Clown Trigger is one of the most aggressive triggers, thus it is not reef safe and should not be kept with small fish or small inverts. Aside from its aggression, the Clown Trigger is hardy and is easy to care for. Be careful if trying to hand feed because they can actually bite. They should be housed in tanks of at least 75 gallons with plenty of live rock crevices and over hangs to explore as well as plenty of open water providing swimming space. A larger tank may be needed to accomodate the Trigger as it grows. The Clown Trigger eats a omnivorous diet consisting of meaty chopped up shrimp, mollusks, urchin, clams, as well as algae based food. Feedings should happen twice a day.
The Clown Trigger is a staple in the marine aquarium industry. It is often hailed as one of the most beautiful reef fish available, and for good reason. If kept in the right tank with the correct tank mates the Clown Trigger will be easy to care for and hardy.