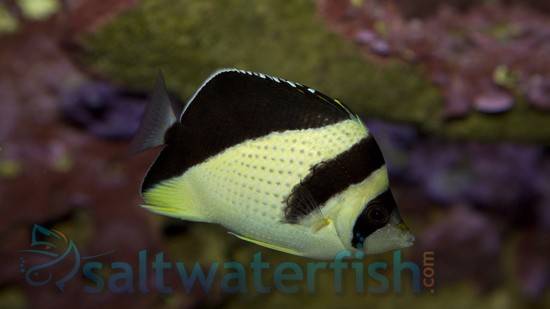 The Burgess Butterfly, Chaetodon burgessi, features a beautiful black and white striped body. Native to the western Pacific Ocean, the Burgess Butterfly requires a tank of at least 70 gallons stocked with plenty of live rock caves and crevices. They are best kept singly, but can be kept in pairs if introduced at the same time or in small groups in larger tank systems.
The Burgess Butterfly is not considered reef safe as they can pick at sessile inverts and some LPS corals. They can, however, be useful tank members by helping control pesky Aiptasia.
It is a hardy fish eating an omnivorous diet, relatively peaceful with other fish that aren't butterflies, and exceedingly beautiful specimens.