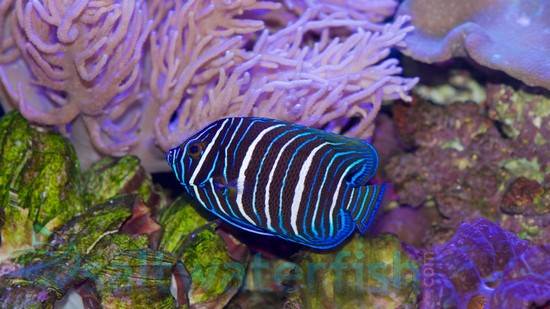 The Blueface Angelfish, Pomacanthus xanthometopon, also referred to as the Blue-Face Angel, Bluefaced Angelfish, Yellowface Angel, Yellowfaced Angelfish, and Yellowmask Angel features a striking  yellow mask around the eyes and blue markings on the face with luxurious blue and yellow scales. Like many other large Angelfish, they have a dramatically different appearance from the juvenile stage to the adult stage. They should also be kept singly since they are aggressive towards other Angelfish.
The Blueface Angelfish is not reef safe, as it will nip at stony and soft coral, sessile invertebrates and clam mantles. Diet should include high quality frozen fish foods consisting of varied vegetables, spirulina, marine algae, mysis and brine shrimp, and high quality angelfish preparations containing spongiform products, 3 times daily.
Juvenile coloration will look similar to many other juvenile Angelfish, displaying vertical lines of black, white and blue.
Came in healthy and active. Very beautiful and bold. Can't go wrong with Saltwaterfish .com. Reviewed by:   stephen Whitney on 01/16/2016