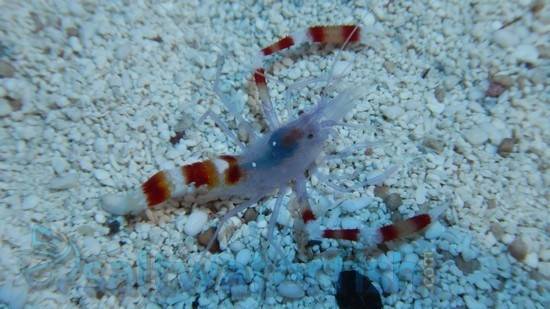 The Blue Coral Banded Shrimp, Stenopus tenuirostris, features a striking translucent and blue body with long white antennae and two muscular pinchers. It is also  known as the Boxing Shrimp for its propensity to hit its prey with those large claws. Mostly peaceful towards other species, the Blue Coral Banded Shrimp should not be housed with members of its own species unless they are a mated pair.
The Coral Banded Shrimp can be sensitive to water quality so it is recommended you keep your water in pristine shape. They prefer tanks with plenty of live rock hiding places to search for their carnivorous diet. They will often lose their exoskeleton in a process called molting while they are growing. Overall, the Blue Coral Banded Shrimp is a staple in the home aquarium for its unique and beautiful appearance and ability to eat pesky bristle worms and flat worms.