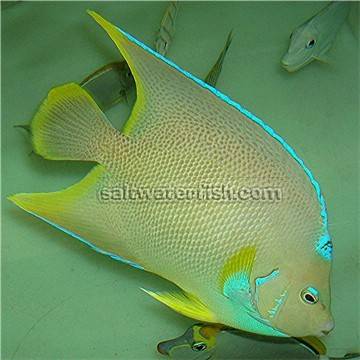 The Blue Angelfish, Holocanthus bermudensis, is also known as the Common Angelfish. The Blue Angelfish has a striking resemblance to the Queen Angelfish, the difference being the Blue Angelfish does not have the crown marking or the facial blue highlights the Queen Angelfish would display. Like many other large Angelfish, the Blue Angelfish will also shown a different color combination from the juvenile stage to the adult stage. They should be kept singly or in a mated pair, as it is a highly aggressive species towards other Angelfish.
The Blue Angelfish is not reef safe, as it will nip at corals, clams and other sessile invertebrates, as well as any sponges or tunicates present in the tank. Diet should include A variety of both meaty and veggie preparations consisting of spirulina, marine algae, angelfish preparations, mysis and brine shrimp, 3 times daily.
Juvenile coloration will display a yellow to brown body, with vertical pale blue striping