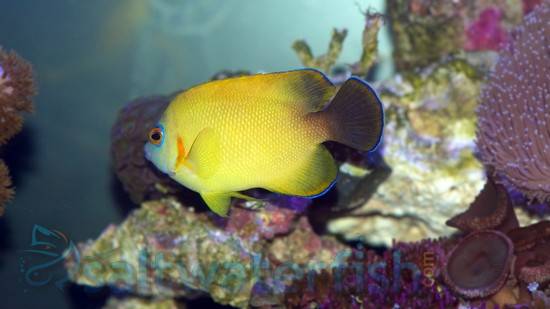 The Blacktail Lemonpeel Angel, Centropyge flavissimus x vrolicki, is a cross between a Lemonpeel and a Halfblack Angelfish. Showcasing a great deal in coloration, this Angelfish could display mutual traits of the Lemonpeel Angelfish and the Halfblack Angelfish, but the tail is always black (however coloration in black may vary) or rear section of the body features colorful blue dots. The sheer vibrancy in colors reasons for its paramount importance in aquarium trade.
Like many other Angelfish, the Halfblack Lemonpeel is not reef safe, as they tend to bite small-polyped stony corals and clam mantles. It is also advised to not keep more than one Angelfish in the same system. Diet should include a variety of options consisting of spirulina, marine algae, angelfish preperations, mysis and brine shrimp, 3 time daily.