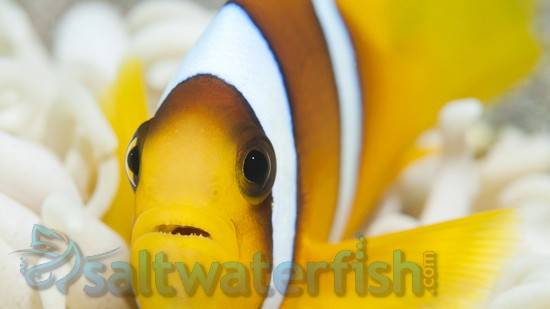 The Bicinctus Clown, Amphiprion bicinctus, also known as the Two Banded Clown or the Red Sea Clown, is yellow/orange in color with a white vertical band behind its head at the center of its body. Similar in appearance to the Clarkii Clown, the Bicinctus Clown is the most prevalent clownfish species found in the Red Sea. Though the Bicinctus Clownfish does not need a paired anemone, they will accept Bubble Tips, Sebae, Long Tentacle, and Carpet Anemones as hosts. The Bicintus Clown feeds on a varied omnivorous diet. Like many clownfish, the Bicinctus Clown is hermaphroditic, and the female clownfish are most dominant. When the dominant female dies, the next largest male will change into a female and assume leadership.